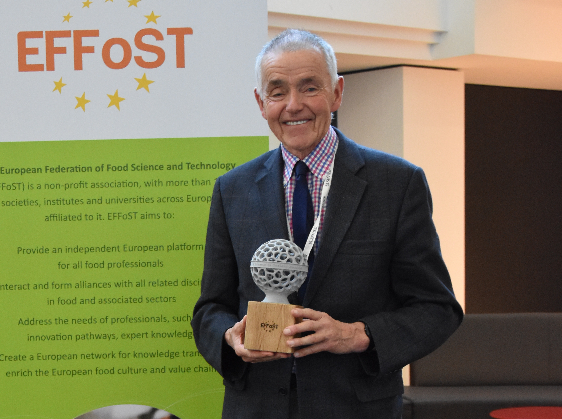 Every year, EFFoST awards a food scientist with the Science to Society Award. This award gives recognition to individuals or organizations whose work has advanced understanding and appreciation of the value of food science and technology to society.

The Board of EFFoST has awarded prof. Ronan Gormley with the EFFoST “Science to Society” Award 2017. Prof. Ronan Gormley is a graduate of University College Dublin in organic chemistry (BSc and PhD) and has conducted post-doctoral research in the USA in chemistry and food science at the Universities of Michigan and Maryland. He also has a Diploma in Industrial Microbiology from UCD. He worked as a senior researcher and food technologist (plant foods) in the Kinsealy Research Centre, Dublin from 1966 to 1988, and then as Head of the Prepared Foods Department at Ashtown Food Centre, Dublin (1988-2006), where he continued until 2009.

Since then he has been an adjunct professor in the UCD Institute of Food and Health. He has published 135 peer reviewed papers, 500 technical articles, has contributed to a number of books as author and editor, and has presented extensively at national and international conferences. He has been involved over a 25 year period as co-ordinator and participant in EU food R&D Framework projects and also in COST projects. He has participated extensively in the FIRM Food R&D Programme conducted by the Ministry of Agriculture, Fisheries and Food of Ireland

This award is for his outstanding contribution in presenting the outcomes of research to the widest possible audience by ‘translating’ scientific reporting into an easy-to-understand layman’s style. He was the coordinator of the FLAIRFLOW Project that ran over several EU Framework programs where his one-page research synopses are renown. He continued such an exercise in Ireland where he led the RELAY dissemination project covering all food research in the country for a number of years. In relation to EFFoST, he has written extensive reports on each of our conferences for Trends in Food Science & Technology.